Character / brand image, package and ad designs for candy store Sweet Town in 2010. Loved putting these together and did them for the sheer fun of it - if 'actual work' hadn't gotten the best of me at the time I'd loved to have continued with these! 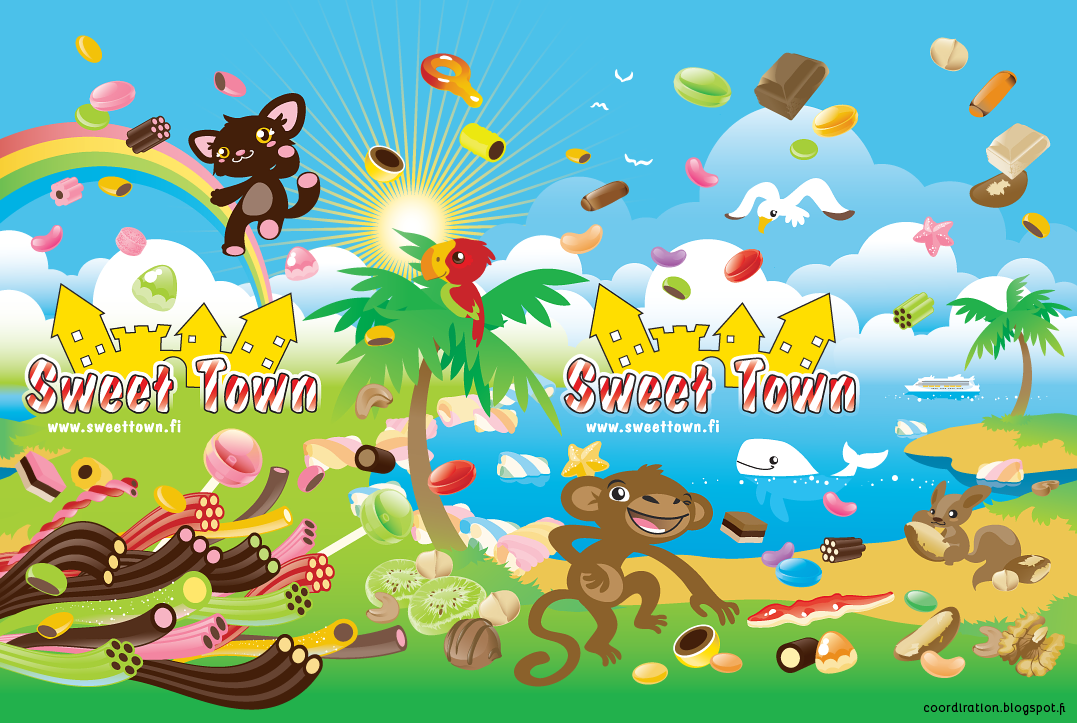 Candy store SweetTown's paper bag. The ship you see floating in the background was modelled after none other than the world's largest cruise ship, Royal Caribbean's Allure of the Seas (and her sister Oasis), that was getting build right next door to me on the Perno ship yards in time of this illustration's conception. I've used the ship on numerous other projects afterwards as my go-to backdrop ship (latest of which was for this very recent sailor themed Hello Kitty shirt - the most prominent appearance of it thus far as well).


My biggest regrets with these visually have always been, that I didn't dare redesign the original logo enough - only retouched a bit what someone else had created - and even more, that I didn't replace the used Dom Casual typeset entirely - thought it would be useful to keep to somewhat tie in with the store's existing brand image material, and for the ease of compatibility, if issues arose somewhere along the production line (one of the things you come too aware of working in a house with loads of ads coming in every day, each using their own set of obscure designer fonts).

Sweet Town's current bags, while not my design, still use some of the elements I drew (without consent, I must point out) in a stylistic hodgepodge with other 'clip art'. I do like the new logo typeset much better though. Also have had couple of these 'moments' on public transportation and around the town: nothing more gratifying than seeing your product is getting used *haha* 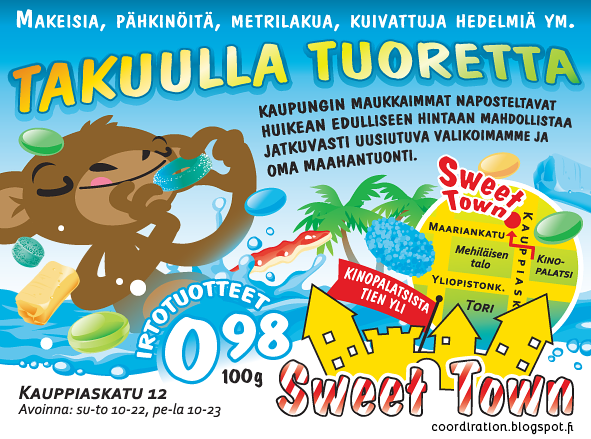 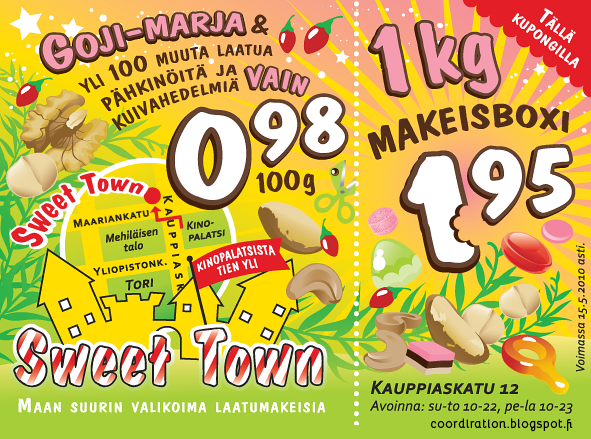 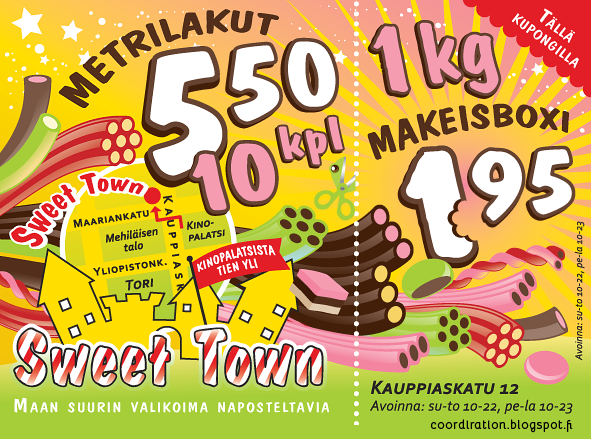 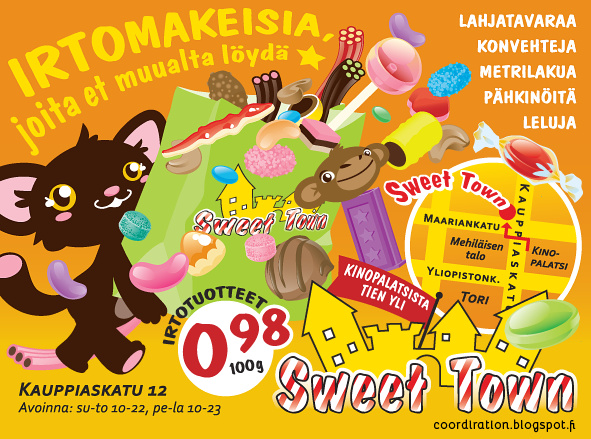 125 x 90 mm sized ads for newspaper print. As usual with small businesses, there's quite a lot of info to scramble in an affordable ad space. It has it's own certain kind of satisfaction and challenge I've grown to like to get something pretty done of such 'tight mess', and I often compare it to playing Tetris - every piece has to fit in just so without much if any white space to spare. 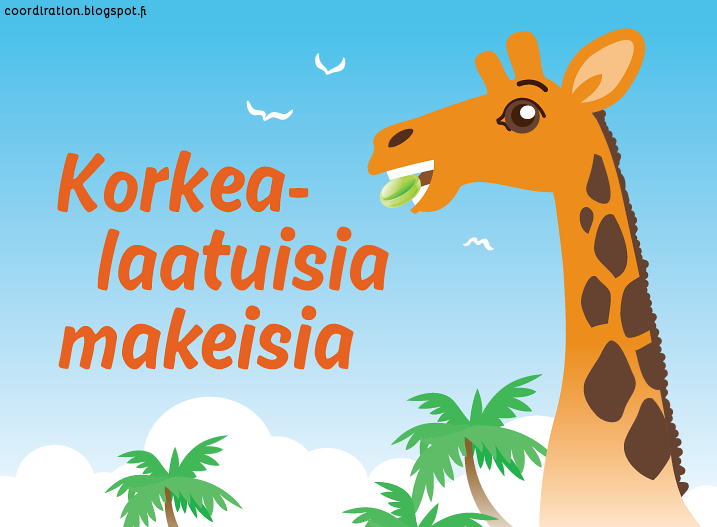 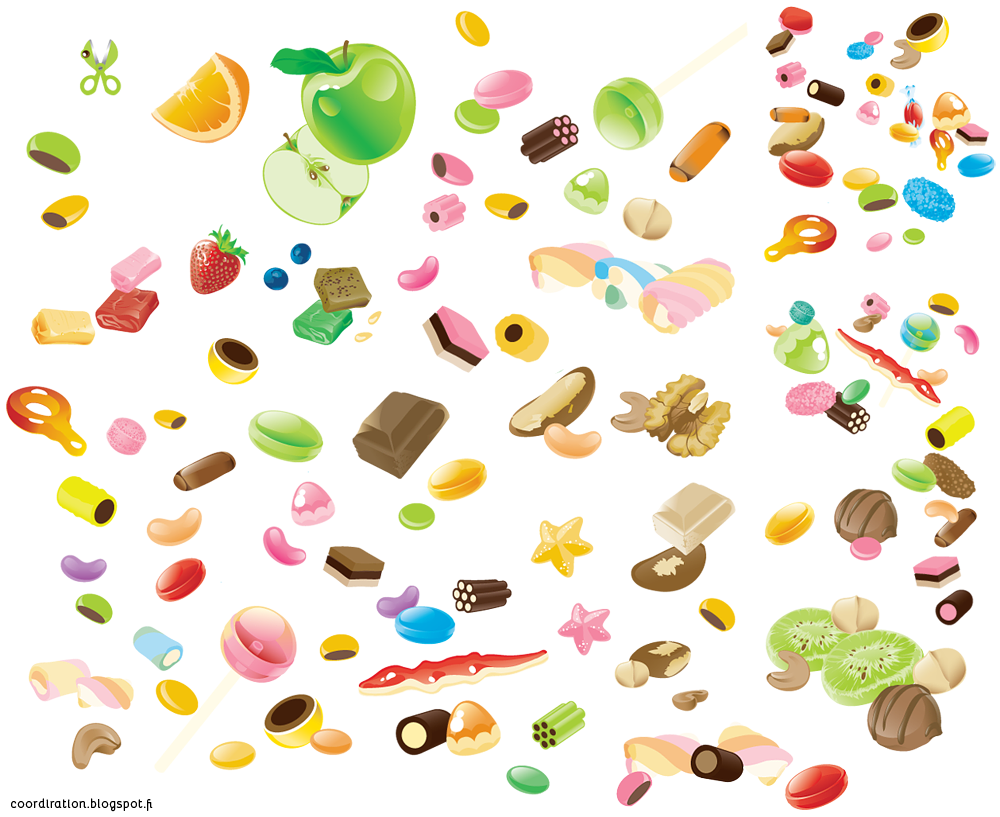 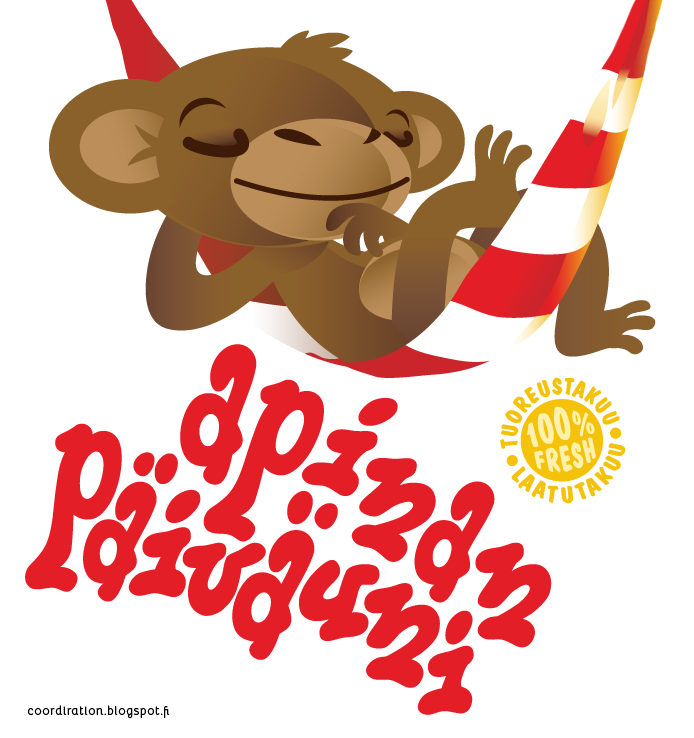 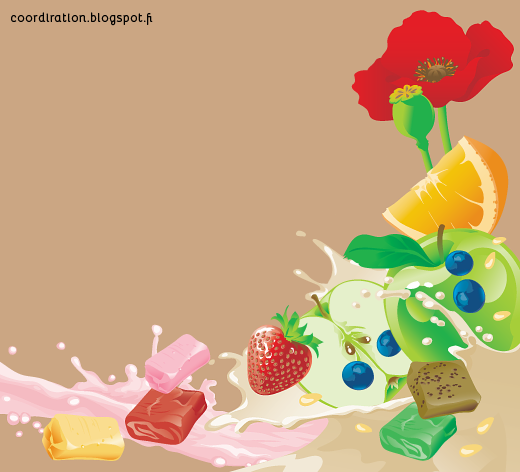 One of the characters I never got to introduce - a giraffe, I figured would've been well suited to promote the store's high quality. These projects left me with a pretty sizable library of sweets and snacks elements, which I've been yearning to put to some further use. Beginnings of title and box art for "Monkey's Daydream" (chocolate banana candies iirc) and an illustration for a mixed toffees bag. 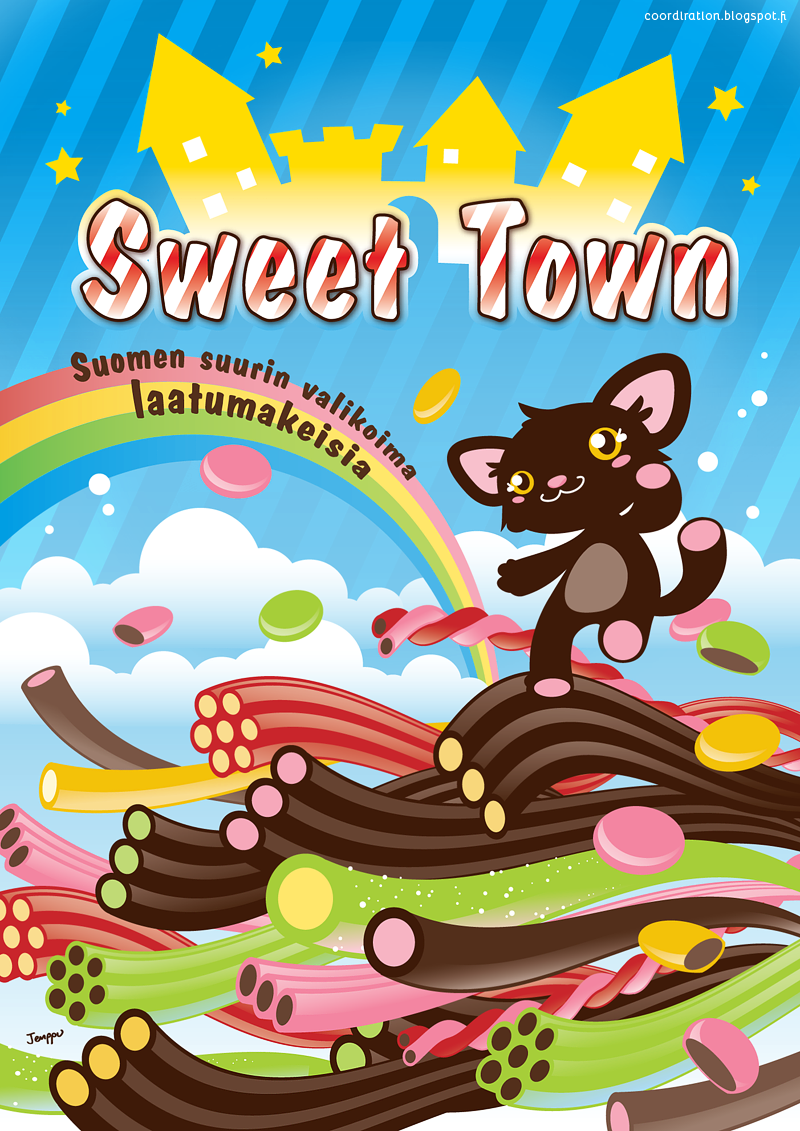 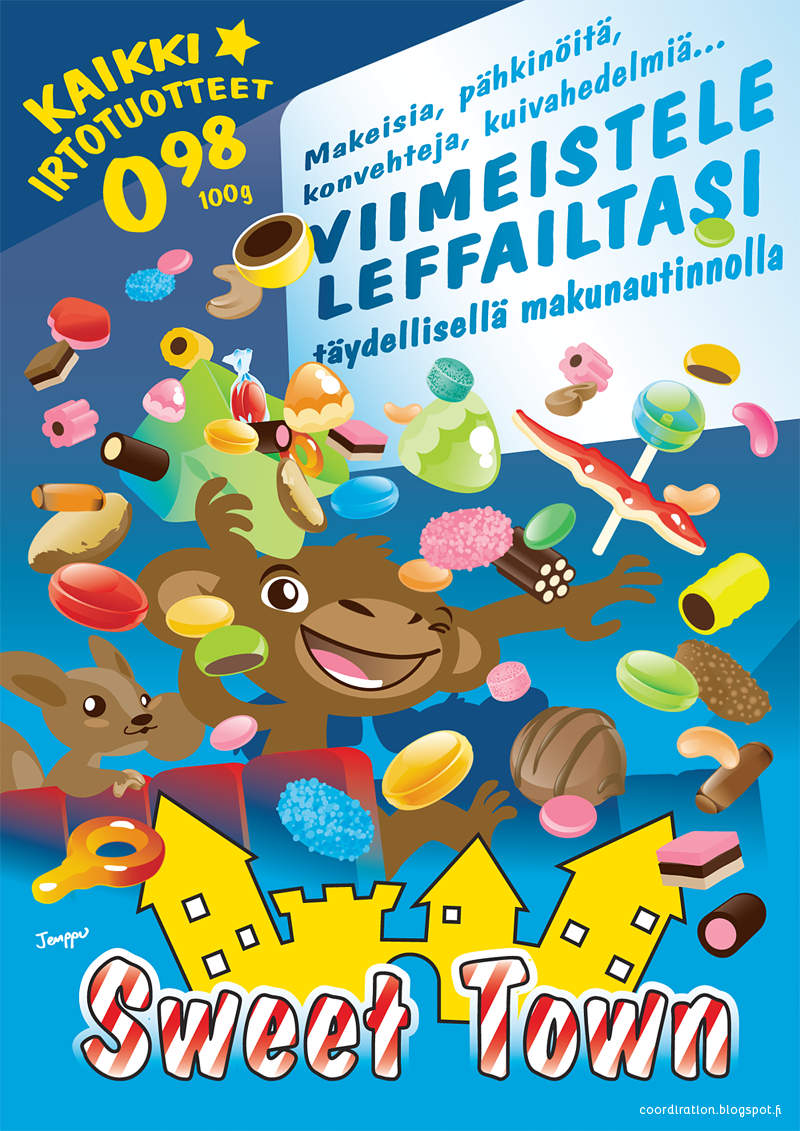 "Lakrissa" I called the first of the characters I came up with, a liquorice legged cat. Then came "Ape", and "Nuts" was the squirrel's name 'unofficially' (not that any of the names were anyhow 'official' anywhere outside my own head anyway).